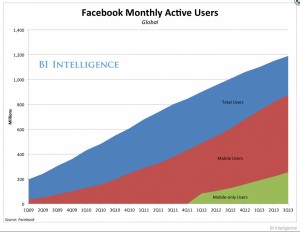 • 254 million mobile-only monthly active users (MAUs), a 16% increase from the previous quarter. For perspective, that’s more than the total number of people who visit Twitter on a monthly basis.

• 874 million total mobile monthly active users, an increase of 7% from the previous quarter.

• Total MAUs reached 1.19 billion, up 3% from the previous quarter.

During the earnings call, Facebook management said that the social network is nearing full penetration of the teen market, but that younger users are not visiting the site quite as frequently as they used to.

After Forrester published a damning report arguing that Facebook is failing marketers, analysts are coming out of the woodwork in opposition, saying that the data supporting Forrester’s argument is “questionable.” (Business Insider)

In a new report from BI Intelligence, we compare the world’s largest social networks in two ways. First, we evaluate the biggest properties side-by-side in terms of total audience size. Then we analyze the markets where each has the most growth potential, and their demographics in terms of country-of-origin. (BI Intelligence)

Twitter’s Director of Product Ameet Ranadive published a thorough explanation of real-time bidding (RTB) and how it can be “re-imagined” for mobile and native advertising. Some analysts believe the article is a clue that Twitter management is thinking about getting into the business of RTB. (Medium)

Facebook, Google+, and Yahoo remain the primary providers of social login information on the Web, according to a study spanning the third quarter. Social logins allow users to sign-in to many websites across the Web with just one set of login information. In such scenarios, users relied on Facebook logins 51% of the time, followed by Google+ (26%), and then Yahoo (18%). (Gigya)